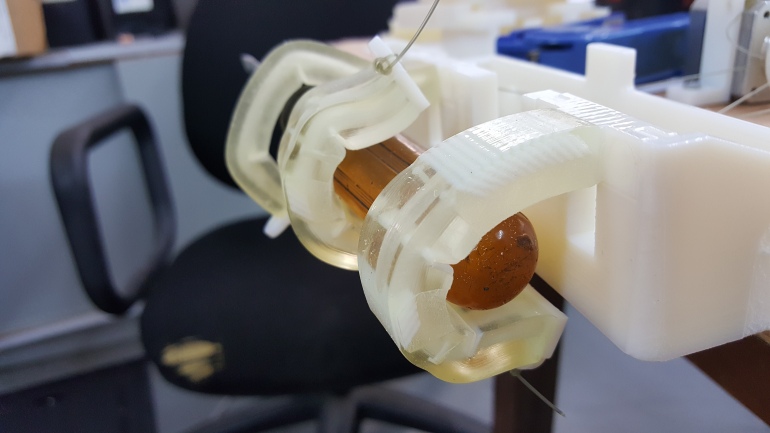 Over the summer between sophomore and junior year (2017), I completed a research internship at the Technion – Israel Institute of Technology in the Soft Matter Lab which is led by Professor Rudykh. Building out from an initial idea that one of the postdocs had, I built a soft robotic hand using a 3d printer. The hand was actuated with fishing lines and stepper motors.

I started off by designing individual fingers to solve a puzzle. Working with a basic finger, we expected it to bend in one direction each time, but it didn’t. After adjusting the design and subsequent observations, I figured out it had to do with how we secured the fishing line to the end of the finger. We had assumed that the method used to secure the wire wouldn’t affect the bending motion but the eccentric loading was enough to matter.

With that initial problem solved, I moved onto designing more complicated fingers. The lab’s 3d printer was capable of printing multiple materials at once, so I could print objects made of hard and soft materials. With this combination of materials, I could design for desired motions as well as a balance between flexibility and rigidity in each of the fingers.

Besides designing the robotic fingers in SolidWorks, I learned a bit of Arduino while writing programs to control the motors driving the fingers. I needed the Arduino board to simultaneously read multiple push-button inputs and then write to one of several motors accordingly. I hadn’t had much experience with Arduino at that point, so it required some trial and error and looking for help online.

In the end, I had a wrist piece and several “fingers” which formed the “hand”, and a motor control system to operate it all.

Iterations of fingers that I made.